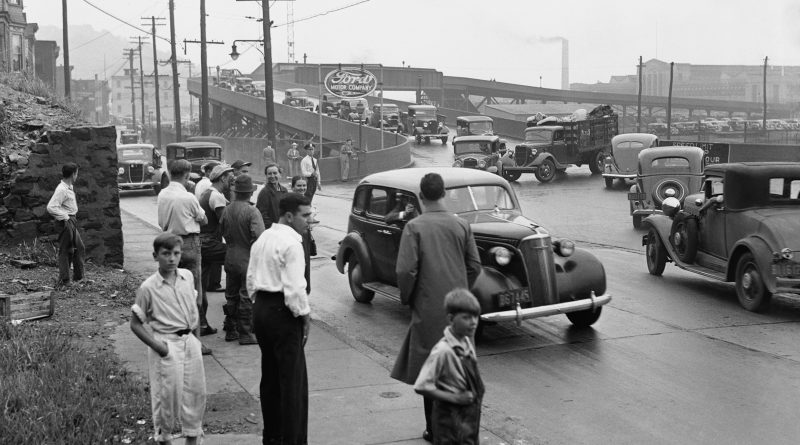 A closer look at the fifty year transformation from the Ford Motor Car Factory to a premiere waterfront condominium and townhouse community located on the Hudson River in Edgewater, New Jersey.

Independence Harbor is a shining example of the renaissance of the New Jersey Hudson Riverfront from commercial wasteland to thriving community.

Renowned for their commercial construction expertise, Hartz Mountain Industries began construction in 1989 on the Independence Harbor community using steel and concrete fabrication. This type of construction became a distinguishing characteristic that has proven its popularity with buyers looking for strength and durability when living directly next to the Hudson River.

Prior to Independence Harbor, the site housed the Ford Motor company from 1929 to 1955. It was then sold and used from 1961 to 1972 for shipping and other industrial uses, when it finally fell in into disrepair. This photo was taken in 1979, ten years before it was redeveloped into the Independence Harbor Condominium complex.

Hartz Mountain retained many of the structural components of the earlier fabrication including footings, pilings, supports and the mezzanine landing, which is now used for an additional layer of parking. Using these existing components has meant that Independence Harbor very much retains the look and feel of the original Ford factory.

Late in 1928, after the Ford Model A had replaced the Model T as Ford’s prime automobile, Ford sold its Kearny NJ assembly plant to the Western Electric Company and then moved its assembly operations to the newly constructed, 1,500 foot long, 35 acre assembly plant in Edgewater New Jersey.

Located at 309 River Road in Edgewater, New Jersey, Ford’s new 400,000 square foot assembly motor plant was opened in 1930 to build the Ford Model A and was noteworthy for its ability to assemble the vehicle in 48 minutes or less from one end of the pier to the other. The Model A was then shipped out at the end of the pier on transport barges to various destinations across America.

Other noteworthy cars manufactured at the Edgewater plant included the 1932 Ford Model B, 1936 Ford Coupe, the 1938 Ford Deluxe Convertible Coupe and the 1938 Ford Mercury as well as countless types of military vehicles though the war years.

At the start of World War II, production was switched to military vehicles, Ford Jeeps and light trucks. Jeep production began in 1943. During the war years the Edgewater plant produced 130,000 military vehicles, many of them were shipped to Russia. At the end of the war production shifted back to civilian cars. Air ace Captain E V Rickenbacker and movie actress Carole Lewis re-opened the production line.

The building itself was designed by Albert Kahn, who became known as the architect for “car guys” after he modernized the industry’s assembly plant concepts. The Ford plant manager was C A Easlinger, who was succeeded in 1936 by W K Edmunds. The building utilized various new construction technologies including the first use in the United States of mushroom columns.

This Plant was considered the most advanced and efficient automobile assembly plant for its time. Built as a replacement for the then outmoded, four-story assembly plant in Kearny, New Jersey, the Edgewater facility was one of the first fully-developed, two-story automobile assembly plants in the United States. Henry Ford took full advantage of the rail line, the deep water frontage, the free lighterage limit zone and proximity to a great labor and consumer market to experiment with the most modern equipment available to efficiently produce a low priced automobile.

At the time of its closing in 1955, this Ford plant had assembled over 1.8 Million Ford Vehicles at a rate of over 6000 vehicles a week.

The commercial site and the 1500 foot pier that housed the main assembly line was abandoned by Ford when it streamlined its vehicle assembly to other locations across the US. Ford sold the land and the plant to a New York realty investor in 1961 who redeveloped the site for shipping and other industrial uses, which ultimately failed and the site fell into disrepair.

With other local commercial operators either closing down or moving out of the area, the southern part of Edgewater fell into disrepair and soon became an industrial wasteland that lasted well into the 1980’s. This is the site where Independence Harbor would later be built, using many of the buildings and features of the original Ford factory including the main factory floor, tie-up bollards at the end of the pier and the bascule bridge. Major structures that were torn down were the administrative building, water tower, oil house, multiple railroad tracks and the automobile bridge across the railroad tracks seen above in a vehicular accident photo from 1932.

March 1, 2019 multisiteadmin Comments Off on Apartment Rentals
About Sidebar

February 28, 2019 multisiteadmin Comments Off on Independence Harbor Realtors
About Sidebar

February 26, 2019 multisiteadmin Comments Off on Independence Harbor Amenities
About Sidebar

February 25, 2019 multisiteadmin Comments Off on Housing Units
About Sidebar

February 26, 2019 multisiteadmin Comments Off on Hartz Mountain: The Builders of IH
Load More