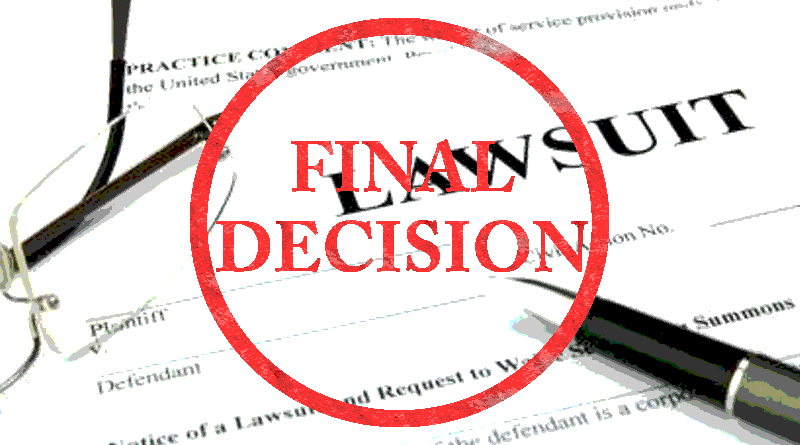 Below is the official decision from the National Arbitration Forum, Professor Darryl C. Wilson as Panelist and Presiding Judge, regarding Independence Harbor I Condominium Association, Inc. v. Noel Turner.

The domain name at issue is registered with Go Daddy Software, Inc.

The undersigned certifies that he or she has acted independently and impartially and to the best of his knowledge has no known conflict in serving as Panelist in this proceeding.

On March 30, 2006, a Notification of Complaint and Commencement of Administrative Proceeding (the “Commencement Notification”), setting a deadline of April 19, 2006 by which Respondent could file a Response to the Complaint, was transmitted to Respondent via e-mail, post and fax, to all entities and persons listed on Respondent’s registration as technical, administrative and billing contacts, and to postmaster@independenceharbor.com by e-mail.

A timely Response was received and determined to be complete on April 13, 2006.

On April 19, 2006, the Forum received an additional submission from Complainant.  This submission failed to comply with Supplemental Rule 7 due to a lack of the required fee. The fee was ultimately received late.  Despite the submission’s failure to comply with the applicable rules, it will be considered by the Panel.

On April 19, 2006, pursuant to Complainant’s request to have the dispute decided by a single-member Panel, the National Arbitration Forum appointed Professor Darryl C. Wilson as Panelist.

Complainant requests that the domain name be transferred from Respondent to Complainant.

Complainant asserts that it has used the trademark INDEPENDENCE HARBOR extensively and continuously since 1987 in the real estate community.  Complainant states that it “is the exclusive licensee of this trademark in connection with real estate management…” activities associated with the “Independence Harbor” development located in Edgewater, New Jersey.  Complainant contends that significant money has been invested in advertising and promotion of the trademark, thereby giving rise to “substantial public recognition and goodwill” in the mark.  Complainant states that Respondent has registered a domain name identical to its mark, specifically <independenceharbor.com>.  Complainant argues that Respondent has no legitimate interests or rights in the mark and that the domain name was registered in bad faith.  Complainant further contends that Respondent is not currently known, nor has he been known by the domain name but instead registered the name solely for the purpose of disrupting the Complainants’ business.

Respondent asserts that he has rights and interests with respect to the disputed domain name and that he neither registered nor has ever used the domain name in bad faith.  Respondent contends that since August 2000 he has been a resident condominium owner in the Independence Harbor development and that in October of that year he registered the domain name <independenceharbor.com>.  He then established a website to serve as a non-profit, non-commercial information site for residents and non-residents alike.  Respondent asserts that he has continuously maintained the website at his own expense and that the website has received no advertising or any kind of sponsorship, nor has it ever been offered for sale or for lease in any way.  Respondent further contests Complainants’ rights in the INDEPENDENCE HARBOR mark and also emphasizes the presence of a disclaimer on his website that indicates that there is no relationship between himself and the registered mark holder.

Complainant, Independence Harbor I Condominium Association, Inc., is an organization that claims an exclusive license in the federally registered mark INDEPENDENCE HARBOR. In support of this assertion, Complainant provided copies of various legal documents, including an Assignment and License Back Agreement (“Agreement”) executed by the Delaware River Port Authority (“DRPA”) and Hartz River Road Limited Partnership (”Hartz”) on July 15, 2002. Pursuant to the Agreement, Hartz assigned the INDEPENDENCE HARBOR mark to DRPA in exchange for an exclusive license to use the mark for real estate purposes associated with the Independence Harbor development located at 361 River Road in Edgewater, N.J. The legal documents indicate that Hartz owned the U.S. Federal Registrations for INDEPENDENCE HARBOR No. 2567209, Registered May 7, 2002, and No. 2558616, Registered April 19, 2002. Both marks are for real estate management and leasing of commercial, residential and retail store properties. One of the documents indicates that Hartz will permit the Condominium Association to freely use the INDEPENDENCE HARBOR mark in connection with its activities. That document further provides that “DRPA shall have the sole right, at its sole expense, to seek legal redress for unauthorized use or infringement of the Independence Harbor mark.” However, if DRPA chooses to not take any action against infringement, Hartz may, under certain circumstances, take action to enforce its rights in the mark. A separate document assigns rights in the mark from Hartz to the Complainant. However, it does not make mention of any enforcement rights.

Complainant has not clearly shown that they are the proper parties to bring an enforcement action regarding the Independence Harbor mark.

Respondent, Noel Turner registered the domain name on October 31, 2000 to supply information about the condominium development in which he lives and owns. The site includes information such as contact numbers, condo rules, sales information, and other data available to residents and the general public. Respondent and the present officers of Complainant condominium association have been involved in a long-running dispute over the content and ownership of Respondent’s website. On May 11, 2004, the condominium association registered their own website .

Paragraph 15(a) of the Rules for Uniform Domain Name Dispute Resolution Policy (the “Rules”) instructs this Panel to “decide a complaint on the basis of the statements and documents submitted in accordance with the Policy, these Rules and any rules and principles of law that it deems applicable.”

Paragraph 4(a) of the Policy requires that the Complainant must prove each of the following three elements to obtain an order that a domain name should be cancelled or transferred:

While the Panel recognizes that the disputed domain name and the registered mark are virtually identical, the Respondent’s registration of the domain name predates the Complainants’ federal registration by two years. Although Complainants’ registration indicates a first use in commerce date prior to Respondent’s registration, there is no explanation of the nature or scope of the use in commerce by Complainant, and it is clear that others used the name Independence Harbor prior to Respondent’s domain name registration and continue to do so. While the INDEPENDENCE HARBOR mark is presumptively distinctive for the services noted based on the registered mark, this does not remove the terms from the lexicon of the public to the extent necessary for common descriptive needs. The mark INDEPENDENCE HARBOR is a descriptive term that is required to be used in order to identify a particular geographical location. See Zero Int’l Holding v. Beyonet Servs., D2000-0161 (WIPO May 12, 2000) (“Common words and descriptive terms are legitimately subject to registration as domain names on a ‘first-come, first-served’ basis.”).

Complainant has not proven this element

Complainant asserts that Respondent has no rights or legitimate interest in . Complainant states that the only apparent use of Respondent’s website is to describe the Independence Harbor real estate development. Complainant has not authorized this use and states that the website contains numerous inaccuracies about the Independence Harbor real estate property. See G.D. Searle v. Martin Mktg., FA 118277 (Nat. Arb. Forum Oct. 1, 2002) (where the complainant asserts that the respondent has no rights or legitimate interests with respect to the domain name, it is incumbent on the respondent to come forward with concrete evidence rebutting this assertion because this information is “uniquely within control of the Respondent”).

Complainant has not proven this element.

Registration and Use in Bad Faith

Complainant asserts that Respondent registered and is using the disputed domain name in bad faith. Complainant claims that Respondent has intentionally attempted to attract Internet users to its website by creating a likelihood of confusion, and that users have likely mistakenly visited Respondent’s website and received bogus information about the Independence Harbor property. Complainant fails to cite any specific portions of Policy ¶ 4(b) that are implicated by Respondent’s website or provide any facts as evidence of Respondent’s registration and use in bad faith aside from the general assertion noted above. The Panel notes that the elements set forth in Policy ¶ 4(b) are illustrative rather than exclusive and that evidence may be presented that does not rely on Policy ¶ 4(b) factors to show registration and use in bad faith. However, conflicting assertions regarding the general veracity of the information on a disputed website without more is insufficient evidence of registration and use in bad faith within the meaning of Policy ¶ 4(b).

Respondent’s disclaimer also indicates a lack of bad faith as it shows Respondent does not intend to attract Internet users to its website by creating a likelihood of confusion with Complainant’s mark. See Al-Anon Family Group Headquarters, Inc. v. Reid, D2000-0232 (WIPO June 5, 2000) (refusing to find bad faith where the respondent conspicuously informs viewers that his site is not affiliated with the complainant and alternatively finding that such a disclaimer is evidence of good faith on the part of the respondent which precludes any determination that the respondent intentionally attempted to attract Internet users to his website by creating a likelihood of confusion with the complainant’s mark as to the source, sponsorship, affiliation, or endorsement of the respondent’s website).

Numerous cases find that if a Respondent has rights or legitimate interests in the disputed domain, pursuant to Policy ¶4(a)(ii), then Respondent’s registration and use of the domain name are not in bad faith pursuant to Policy ¶4(a)(iii). These cases find such a result even where the Respondent is using the domain name in connection with a fair business interest or otherwise offering goods or services on their website. See Schering AG v. Metagen GmbH, D2000-0728 (WIPO Sept. 11, 2000); see also DJF Assocs., Inc. v. AIB Commc’ns., FA 95612 (Nat. Arb. Forum Nov. 1, 2000). There is even stronger support for a finding of good faith where Respondent’s use of the domain name is merely descriptive and Respondent’s website is purely informational and non-commercial in nature.

Complainant has not proven this element.

Having failed to establish all three elements required under the ICANN Policy, the Panel concludes that relief shall be DENIED.

March 1, 2019 multisiteadmin Comments Off on Apartment Rentals
Condo Board Lawsuits

March 1, 2019 multisiteadmin Comments Off on Apartment Rentals
Condo Board Sidebar